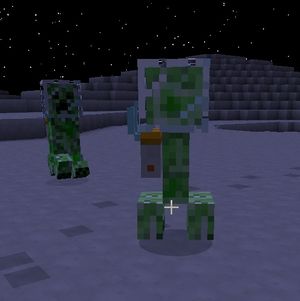 An Evolved Creeper on the Moon

Evolved Creeper is a hostile mob that the spawns on the Moon and Mars. This mob is slightly taller than its Overworld counterparts. It appears to be wearing two medium oxygen tanks and oxygen gear and helmet. Its explosion is bigger than the normal creeper, takes longer to charge and makes no noise when it gets hurt.

Likely most of Minecraft hostile mobs, they will spawn in dimly lit areas except on Space Station and vanilla dimensions.