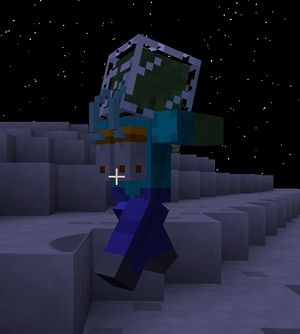 An Evolved Zombie on the Moon

Evolved Zombie is a hostile mob that the spawns on the Moon and Mars. This mob is slightly taller and walks about 2x faster than its Overworld counterparts. It appears to be wearing two medium oxygen tanks and oxygen gear and helmet. Zombies do NOT have an oxygen supply and do not run out of air. Evolved zombie is one of the five mobs that can survive in the airless dimensions.

Likely most of Minecraft hostile mobs, they will spawn in dimly lit areas except on Space Station and vanilla dimensions. They also will burn in sunlight.

Tip: When fighting with Evolved Zombies, it is recommended that you use powerful weapons like a sword with Sharpness II or higher and bows with Power III and Punch I or higher, that is because these zombies run faster and have 50% more health points than vanilla zombies.