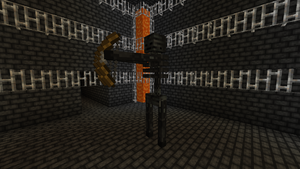 The Evolved Skeleton Boss in the Moon Dungeon

The Evolved Skeleton Boss is the boss mob of the Moon. It can only be found in the Moon Dungeon, in the room before the one that holds the Treasure Chest.

The Evolved Skeleton Boss looks very similar to a Wither Skeleton, but is taller and with dual bows instead of a stone sword.

The boss spawns just after the player has entered the room. It can be fought with arrows or melee attack. Splash potions of harming or poison are useless, the boss is also immune to lava.

During the boss fight, the Evolved Skeleton Boss' primary form of attack is shooting from its dual bows. The boss will chase the players in the room if they get away from it. If the player is close enough, it can also pick up players and throw them across the room. Watch out for the lava pillars at the corners: they can mean death if the player gets trapped in them. Like all Galacticraft bosses, leaving the room will de-spawn the boss.

The boss is beaten when it loses all its health, then it will spin, scream and explode (the explosion does not cause any damage) leaving the key to the treasure chest in the next room upon its death. This chest contains valuable and is likely to contain a Tier 2 Rocket Schematic. If you happened not to find a schematic, you can try another dungeon and fight the boss again.