The Moon Buggy is the primary means of transportation on the Moon. The vehicle functions in a similar manner as a boat does in The Overworld. The buggy is able to climb and descend over hills and craters on the moon, though slowly.

It is possible to take fall damage while driving the buggy so it is advisable to avoid taking craters head-on at full speed.

Right-click to enter and 'sneak' to exit the buggy.

To fuel a Moon Buggy, you must first craft and place a 3x3 area of Buggy Fueling Pads. A Fuel Loader must also be placed adjacent to the Fueling Pad and supplied with fuel. The fuel level can be checked by mounting the Moon Buggy and pressing the F key. 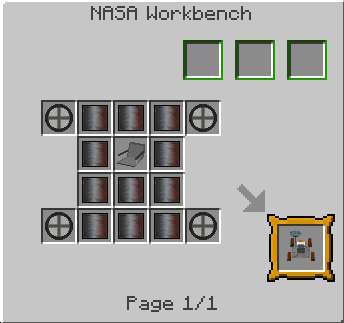 The Moon Buggy needs to be crafted in the NASA Workbench after you unlock its schematic. The schematic can be found in tier 1 treasure chests, found after defeating moon dungeon bosses.

The following materials are required:

Add a Buggy Storage Box in one of the top-right slots when crafting to increase the storage of the buggy (up to three may be added).

This section is empty. You can help by adding to it.