The Parachest is a block that is used to store items. It works in much the same way as a standard chest, but with added functionality. Parachests are automatically generated when landing on either a Space Station or upon return to the Overworld. Once you have entered either of the these dimensions a parachest will appear and is suspended from a parachute that will slowly fall until it lands on a solid block. The purpose of the Parachest is to allow you to safely recover your Rocket, the cargo inside the rocket if any, and any unused fuel that was inside. They have an internal storage capacity of 0(default, only rocket/pads/fuel), 18, 36, or 54 slots depending on the cargo capacity of the rocket used, but has two additional storage slots for holding the rocket itself and the Rocket Launch Pads. Additionally, the parachest has an internal storage tank for recovering any unused fuel. To recovery the fuel you must place an Empty Liquid Canister into the slot next to the tank gauge. The parachest looks very similar to a standard chest, but with grey trim and an added hook on top for the parachute to attach to. Unlike standard chests, parachests may be placed directly next to each other and will not connect. 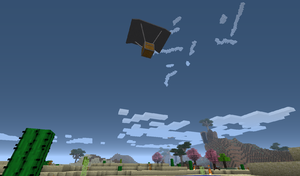 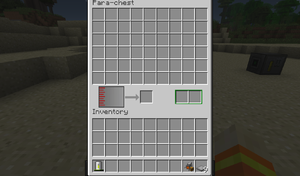