Moon villagers are currently the only passive mobs that can be found on the Moon. They live in the Moon Villages.

Moon villagers are tall and blue-skinned, with large noses, red eyes, and massive brains. They bear some resemblance to the villagers found in the Overworld, although they are taller and cannot be traded with.

Moon villagers do not breathe – they live in an airless environment – and do not seem to have any mouths at all. Their brains, or at least their crania, are massive compared to Overworld Testificates, implying that they are highly intelligent (this may explain why they do not speak). The moon villagers are seen happily walking around the moon’s surface despite the extreme temperatures (as high as 390 K during the day and as low as 100 K at night) and its corroding regolith. Their robes also seem to be made of some material that can withstand such conditions.

It is unknown what moon villagers eat, as there are no obvious sources of food on the moon. They could possibly feed on the trees seen growing in their villages, or they may eat the flesh of monsters they catch on the lunar surface. They may even be cannibalistic.

The origin of the moon villagers is a mystery. They may have evolved independently on the moon, or have been brought there by travelers from the Overworld. It is even possible that they were once brave colonists that evolved into what they are today. According to moon villager legend, their ancestors lived in tiki-heads beneath earth’s oceans, meaning they may have evolved from highly intelligent sea creatures that worshiped gods and behaved like under water tikis. 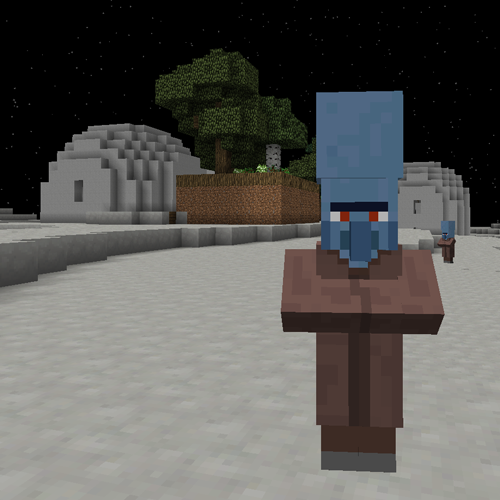 A Moon Villager and Village

Categories:
Retrieved from ‘http://galacticraft.mods.wiki/w/index.php?title=Alien_Villager&oldid=3818’
Cookies help us deliver our services. By using our services, you agree to our use of cookies.